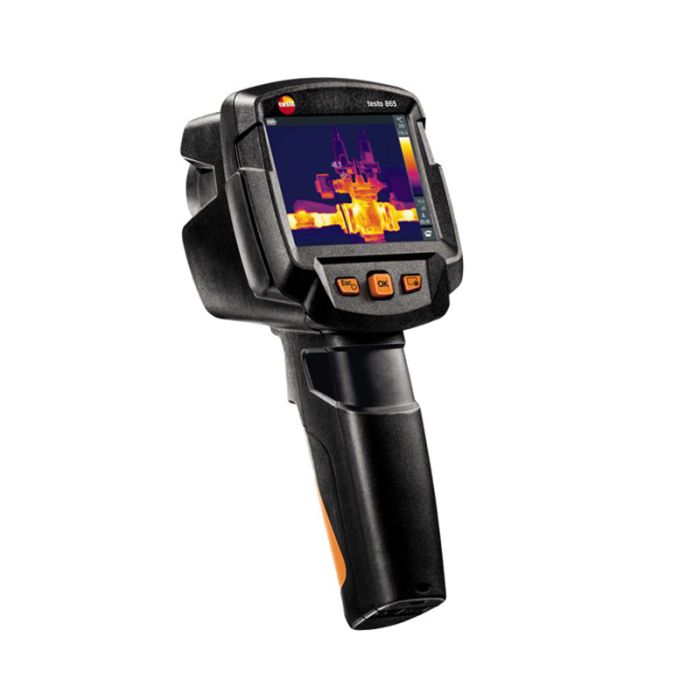 The Testo 865 is one of the most affordable, feature rich thermal imaging cameras available. Simple to set up, use and interpret information, it is ideal for everyday inspections and troubleshooting for those who want to identify issues quickly and safely. The Testo 865 is also perfect proving tool for showing customers problems that cannot always be seen with the naked eye, such as sludge build up in radiators or blocked pipes. Customers can easily see before and after images.

With a thermal resolution of 160 x 120 (19,200) pixels and the ability to identify temperature differences as little as 0.12°C, the testo 865 provides readings accurate for many day to day applications including…

The thermal resolution of the Testo 865 can is boosted to 320 x 240 thanks to SuperResolution technology. When activated, the 865 takes 4 images for each single trigger press. The images are then overlapped to produce one image with twice the thermal resolution, mimicking the resolution performance that of more expensive thermal cameras.

The testo 865 also automatically identifies hot and cold spots to instantly identify potential problems. Images can be saved as JPEGs which makes it easy to send images to clients or store for your own records. The Pro software included allows for further image evaluation should reporting by the user be required. The Pro software is free and easy to use with on screen instructions.

Another great feature of the 865 is ScaleAssist, which automatically filters undesired temperature extremes out of the image. Without ScaleAssist, extremes can mask small temperature differences which could cause issues to be missed. For example, gaps in insulation or small leaks in pipes. ScaleAssist is a feature on all Testo 870 series thermal imaging cameras.