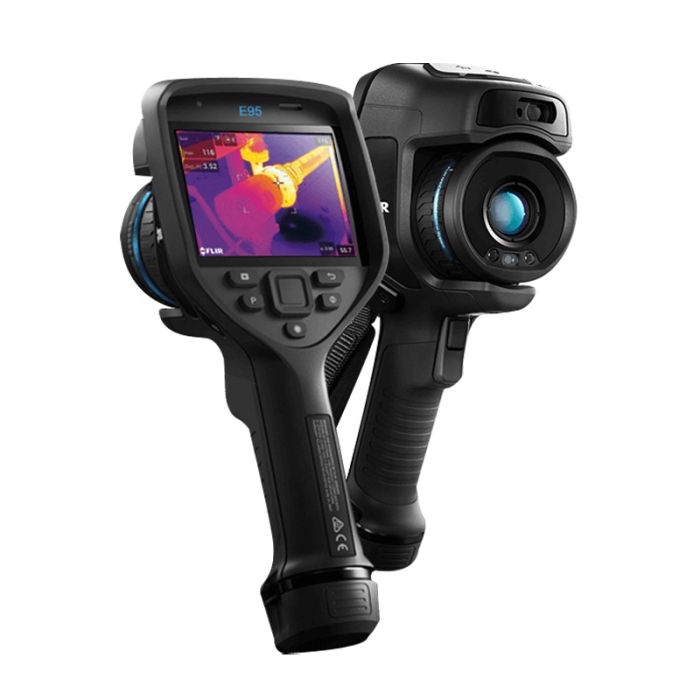 The Flir E95 is the top of the range and highest specification camera in the Flir Exx range. With its superior resolution and temperature measurement range it can pick up and record the most subtle of differences between hot/cold spots. This camera can be used for all kind of applications in a multitude of industries such as, packaging, building maintenance, the armed forces, product manufacturing and many more. Having this level of specification in a handheld, pistol-grip camera is rare, this means that the engineer using the camera can easily analyse the area they need to without the hassle of carrying a large camera that would take up huge amounts of space. The 4" LCD touchscreen allows for simple navigation through the settings, cutting out downtime when looking for the correct settings for the application that is being worked on.

With the highest resolution in the range of 464 x 348 pixels (161,472) this gives the detail needed when working on jobs that require the highest level of accuracy. With the quality of the image being so high it can allow more informed decisions to be made about the potential action when an anomaly is identified. This enhanced resolution goes hand in hand with the improved temperature range of -20°C to 1,500°C, with this range the E95 can be used in any environment and with the thermal sensitivity of 0.03°C even the slightest difference in temperature can be identified. The E95 can both capture images and record videos, there is also a microphone installed meaning that voice notes can be added to the video. The laser distance meter within the camera adjusts the autofocus more accurately to give the clearest image of what is being analysed. Another feature that can help the visibility of faults is the variation of the colour palette that can be used.

The MSX enhancement is a feature on the Exx camera that allows for a crystal clear image. by putting the outline of the real image over the thermal image as the MSX enhancement does, it eradicates the doubt of which area of a machine/appliance is showing an irregularity. Another feature is the picture in picture mode, this places a thermal window in to the normal digital image. The thermal span identifies the highest and lowest temperature in that particular image, this can be compared to what the user believes the temperature should be in the environment they are testing in. All these specialist features speed up the decision making process making the people using the camera more efficient.

With the Flir tools app, the capability of the E95 expands even more with a smartphone or smart device. One aspect of this is the Ultramax resolution, simply export an image taken on the camera to the Flir Tools app via Bluetooth, then using Ultramax resolution the image can be improved by 4 x the pixel count of the image, giving an even clearer image. METERLINK is a feature by Flir that reduces the chances of faulty records, this is because METERLINK lets readings from some Extech units to be transferred to the E95.