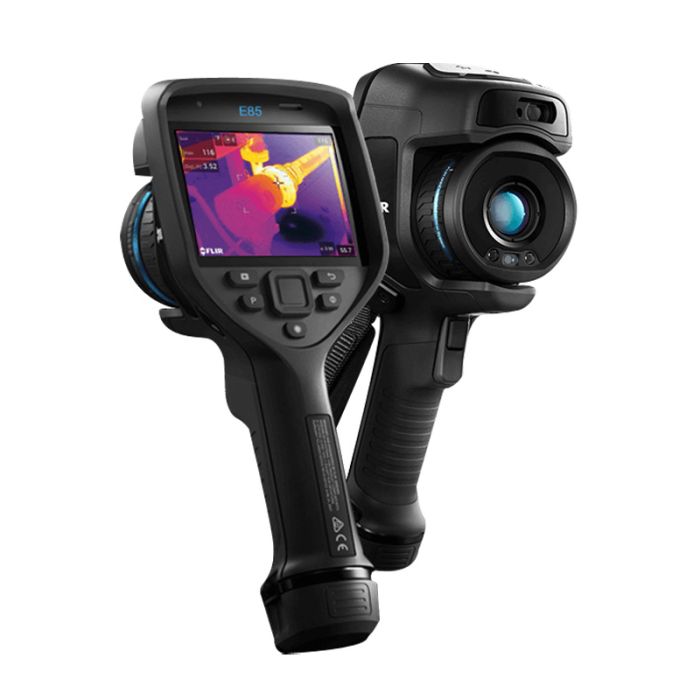 The Flir E85 is the upgraded version of the Flir E75, with a more advanced feature set, with this feature set the E85 can detect the slightest different in temperature readings between areas giving an accurate reflection of where the potential problems may lie. The applications this camera can be used for are detecting moisture instructions, looking at construction deficiencies, identifying air leaks and looking for inefficiencies in mechanical systems. The E85 has the same ergonomic design as the previous iteration (Flir E75), making it easy to point and shoot at whatever the user is trying take images of. The touchscreen allows for easy navigation through the settings that best suit the application required.

Compared to the E75, the E85 has a higher resolution of 384 x 288 (100,592 pixels) compared to 320 x 240 on the Flir E75, the gives a crisper image, meaning that the most minute differences in temperature can be identified, these differences can then be tracked early and investigated and can save the user time and money before a potential problem grows. Another benefit of the E85 over the E75 is the larger temperature measurement range of -20°C to 1,200°C, this gives the engineer a larger scope of what it is they can inspect, making it less likely for problematic areas to be missed. As well as being able to capture images, the E85 can record videos, with the on-board microphone, voice notes can be added to the video to give context to it, if being referred to at a later date. The autofocus on the camera is aided by the laser distance meter, this guarantees a clear image. Being able to alter the colour palette on the images is useful, it places emphasis on the areas of highest/lowest temperature

A feature on the E85 that gives more clarity to images is the MSX enhancement, this puts the outline of the real image over the thermal image, giving a much crisper image allowing for easier identification of temperatures and where the contrasting temperatures lie. The picture in picture mode, creates a thermal window in the digital image, giving context to what specifically is being measured. Along with this is the thermal span of the highest and lowest temperature recorded in the image, so that the general scope of the area can be correctly evaluated. With these on board features available it allows for instant decision making on-site.

Ultramax resolution is an innovative feature by Flir, this allows images taken with the Flir E85 to be transferred to the Flir tools app on a PC or smartphone, using the app an image that has been previously taken on the camera can then be enhanced by up to 4 x the pixel count. This gives even greater detail on the thermal image capability of the E85.